There he was standing in the middle of the cafeteria. As he stood there a feeling of embarrassment began to settle over me. He started to walk around the room as if he was looking for someone. Someone probably being me. I ducked a little lower underneath the table asking my friends to cover me. After a couple of minutes, he found me. He smiled and started walking to our table. He always wore Wrangler jeans and a Cabela’s button-up shirt. It was his idea of professional clothing. My stomach started to turn. As he reached our table he knew most of the girls that sat with me. He asked me “why aren’t you eating?” I simply told him I forgot my money. He gave me some money and told me he’d see me after school. I don’t know why I felt the way I did, but I did. My dad was white and I was embarrassed.

These feelings began when I was in the fourth grade. The community we lived in was very small. Everyone knew everyone. I was around seven when I was able to finally live with my dad. I was happy to finally live somewhere for more than a couple of months. One day our school went on a local field trip to pick up trash. My friends told me that a couple of kids were making fun of my dad’s car. My dad at the time worked at the school across the street. I didn’t understand why they would be laughing at my dad’s car. It wasn’t until a few months later I discovered my dad was “white.”

Obviously, I knew my dad was white. I just didn’t know he was well “white, white.” The other kids began to find out who my dad was and well that’s when my feeling of embarrassment started. I sometimes wished that my dad was “Native” just so that I would be like everyone else. No matter where we went whether it was to school, to the gas station, or to town I always felt like there were eyes watching us. I always wondered what people thought? This white man bringing in the native girl. 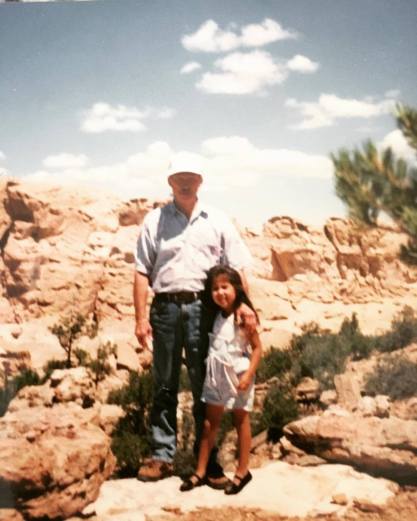 These feelings just wouldn’t go away not even as I entered middle school. By this time my dad no longer worked across the street, he’d moved to the high school to run their ISS  (In School Suspension) class. So he was around a lot. Hence the intro to our lunch encounter. My dad never did anything intentional. He was an old-school parent. Very strict and very involved. I don’t know if he even noticed my feelings, but if he did he hid them very well.

I mentioned my dad was very involved. He made sure we always had something to do. Whether it was work or play. Every year he would buy us fishing licenses and we would take the boat out to go fishing. He also taught me to shoot my first gun. That was exciting. I learned to split wood and as I got older I would be in charge of loading the truck. Although he was never a great cook we’ve had some pretty amazing frozen dinners.

At this point, you might be a little confused on how I went from saying I was embarrassed by my dad to how he does all these amazing things for us. The next part is where I grew up.

The day came for me to get dropped off. We had to do a full day of matriculation. Basically getting finances in order, getting all the uniforms, and saying goodbye.

This goodbye was a little hard.

Since my dad always liked to do things early we were one of the first people done. They allowed my dad to walk me to my room and say goodbye. He looked at me and I looked at him. We’ve never had a real emotional moment. Yet, I knew what he was feeling because I was feeling the same way. He told me he loved me and I did the same. A few minutes later he was gone. There I was all alone unsure what was to come next. Little did I know I was about to be a part of something bigger than myself.

At that moment I no longer felt like Alyssa Scott, the little native girl that lives with the white man. The one who’s mom was over drinking at so an so house and is now in jail.

I was Alyssa Scott from Thoreau, NM, the girl who had been given an opportunity. The girl who was able to have doors open and dreams no longer be dreams. 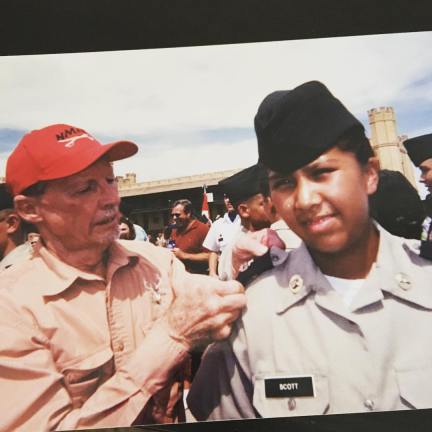 My dad wasn’t just a “white man.” I hate that label. I’ve heard it a lot growing up. My dad was a single father who raised two kids on his own. He was in the education field which isn’t exactly a “get rich” kind of career. He had two mouths to feed. Two tuitions to pay. He found other ways to build an income and give us better. If there was ever a problem he never once expressed it.

When I sit down and think about those years of “embarrassment.” I’m ashamed. A man who was in his early 60’s decided to embark on a journey to raise “the little native girl.” A man who went back to work after having retired to provide for his children. A man who didn’t have to continue caring for me after 18 years old; helped raise his granddaughter. He is the man that will forever be recognized in my heart. Not only as Duke, my legal guardian, but Duke my dad.

Three years ago I lost my dad to Lung Cancer.

Cancer doesn’t see color nor does it care. The last year and half I shared with my dad was amazing. We created a bond that no one understood. Not many people are there when their loved one takes their last breath. I was. That moment was so powerful and amazing. I never took it for granted. My dad saved me. My dad didn’t let me become another statistic or fall into a cycle. Whenever he got an opportunity he would tell people about my brother and I. Now the tables have turned. I tell people proudly who my dad is and was. My dad was an extraordinary man. He raised me into the woman I am today and to him, I say thank you.

My dad was white and I am proud to be his daughter.

View all posts by alyjohnson